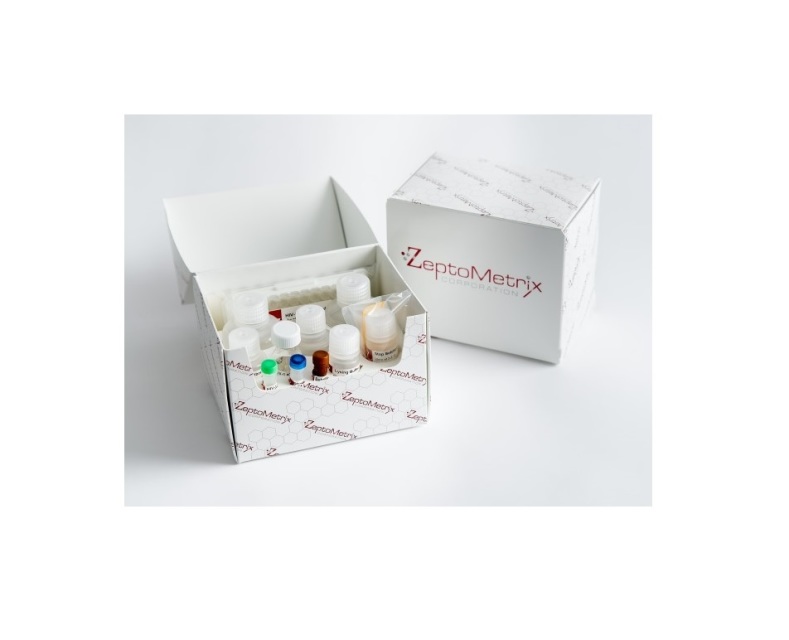 p24 Antigen Elisa Kit is available at Gentaur in all European Countries.

Detection of p24 Antigen and Other Early Markers During InfectionTFollowing HIV infection, the sequence of markers to identify infection in their chronologic order of appearance in serum are: viral RNA, p24 antigen, and anti-HIV antibody. About 2 weeks after infection, viremia is thought to increase exponentially and then decline to a steady-state level as the humoral and cell-mediated immune responses control HIV replication. This time interval, the serologic "window period," is characterized by seronegativity, occasionally detectable antigenemia, viremia (as measured by RNA), and variable CD4 lymphocyte levels. Detection of specific antibody to HIV signals the end of the window period and labels the individual as seropositive.

The exact time when HIV RNA, antigen, and antibody can be detected depends on several factors, including the test used, individual host responses, and viral characteristics. Viral RNA can be detected within the first 2 weeks using the highly sensitive RT-PCR method. Antigen, although transient, can appear as early as 2 weeks after infection and lasts 3 to 5 months. Newer generation antibody assays, including the HIV third generation antigen-sandwich antibody assays, can detect antibody in most individuals at about 3 to 4 weeks post-infection. Latein the course of infection, i.e., as progression to AIDS occurs, anti-p24 antibody decreases and p24 antigen again becomes detectable. The decline in antibody to p24, the production of antigen, and the generation of immune complexes are most likely related to changes in viral replication, because antibodies to other components (e.g., envelope glycoproteins) persist throughout infection.

In summary, for the screening of blood or for diagnosis, the current serologic window period represents a period of about 3 to 4 weeks when HIV infection cannot be demonstrated using antibody tests. Methods that detect p24 antigen can shorten this period by about 1 week, although not all seronegative HIV-infected individuals will be identified. Tests that detect viral RNA can reduce this window period by another several days over antibody and antigen identification, but these assays are not currently suitable for routine laboratory use due to their requirement for sophisticated equipment and technical expertise. Therefore, the period after infection when diagnosis is possible may be reduced to 2 weeks or less if an all-inclusive testing strategy utilizing antibody, p24 antigen, and RNA detection methods is employed.

Uses of the p24 Antigen Test

There are several uses, and mis-uses, of the p24 antigen assay. It is important to realize that the p24 antigen test detects soluble p24 antigen, presumably following viral replication, and does not specifically identify live virus. Therefore, a positive antigen test does not confirm that a sample is infectious, and should not be used for that purpose. The only means available to demonstrate that a sample contains infectious virus is by virus isolation and culture. A negative result for antigen does not rule out infection, because the test lacks exquisite sensitivity; i.e., the test should not be used to verify noninfection. Antigen detection signals infection, however, and positive results in seronegative individuals can be an effective, although not cost effective, means to identify early infection.

The p24 antigen test is most useful in detecting antigen in supernatants from cultures that have been inoculated with cells from a patient suspected of being infected (viral culture and isolation). The antigen test is the method of choice for detecting the presence of free antigen in culture, and it is two orders of magnitude more sensitive than the reverse transcriptase assay. The test is most useful for detecting viral antigen in culture fluids because large quantities of antigen are exuded in the supernatant fluid during viral replication.

The antigen test can be performed on fluids other than those of culture and serum. Evidence determined from the testing of cerebrospinal fluid (CSF) indicates that many patients with HIV dementia and encephalopathy have detectable antigen in CSF, most likely due to active replication of the virus in cerebral tissue.

The p24 antigen test can be of value in blood screening, for identification of acute infection, for monitoring infection, andto assist in the diagnosis of infection in the newborn (each is discussed subsequently). It has been used for detecting early infection in rape cases, identification of infection after occupational exposure, and for assisting in the resolution of indeterminate Western blot results. The degree to which p24 antigen assays can detect p24 antigen from all clades of HIV-1, HIV-2, and HIV-1 Group O, however, is unknown.

p24 antigen may not be readily detected (particularly in asymptomatic infections) because its concentration in serum may be low due to low viral replication. The antigen test isrelatively insensitive, being able to detect only about 10 pg/ml of p24 antigen. This quantity of antigen may not be present in the serum of infected individuals, even when the virus is actively replicating. In fact, only about 50 to 60% of AIDS patients, 30 to 40% of AIDS-related complex (ARC) patients, and 10% of asymptomatic patients will have p24 antigenemia.

Furthermore, the degree of antigenemia seems to vary depending on the population tested. For example, several studies have shown that African patients with AIDS have higher levels of antigen than a similar group of individuals in the United States. Conversely, African patients infected with HIV but who are asymptomatic have been shown to have lower levels of p24 antigenemia than a similar group in the United States.

One reason for the lack of sensitivity of the antigen test when testing the serum of HIV-infected persons is that free p24 antigen in serum may be complexed with p24 antibody. The test cannot detect complexed antigens. Even with complex dissociation, however, the sensitivity remains low and the test can only detect about 50% of asymptomatic patients.

Principle of the Assay

Although procedures vary between manufacturers, HIV p24 antigen tests employ ELISA technology with modifications to detect antigen, not antibody. In a representative assay, such as an "antibody sandwich" type, a specific monoclonal antibody toHIV p24 is attached to the solid phase (microtiter plate-well or polystyrene bead) acting to "capture" the viral antigen in the sample when added. The sample is diluted in a Triton X100 detergent to disrupt virions, and if antigen is present in the serum, the antigen will attach to the monoclonal antibody on the solid phase. Following a wash step, an antibody detector is added and incubated. This detector reagent is usually a high-titer antibody to p24 antigen that is coupled to biotin. Subsequently, incubation with a conjugate (streptavidin-peroxidase) labels the complex by attaching via biotin. An avidin-biotin system acts as an amplifier to generate additional signal to detect the small quantities of antigen in the sample. Addition of a substrate (tetramethylbenzidine) will allow the production of color as the enzyme cleaves the substrate. A weak acid (e.g., 2 M sulfuric) is finally added to stop the reaction after a defined period of time. Resultant optical density values are proportional to the amount of HIV-1 p24 antigen in the specimen. This assay can detect p24 antigen in the pg/ml-to-ng/ml range. The optical density is read with a spectrophotometer at 450 nm.

Confirmation of the Presence of p24 Antigen

The sample, presumably containing the antigen, is incubated with a neutralizing reagent that is a human anti-p24 antibody. During this incubation, if antigen is present, it will be complexed with the neutralizing antibody and prevent p24 antigen from being bound by the solid-phase capture reagent in the p24 antigen assay. Subsequently, the antigen assay is repeated on this preincubated sample along with an aliquot of the same sample that has not been preincubated with the neutralization reagent; the O.D. readings are compared. For the sample to be considered confirmed positive for antigen, the O.D. readings of the sample following the neutralization must be reduced by at least 50% compared to the O.D. readings of the nonneutralized aliquot. If this degree of reduction (inhibition) does not occur, the sample is not confirmed for antigen, and the reactivity was probably not due to p24 antigen; further resolution is necessary by RNA testing or follow-up testing.

Because all assays are performed in duplicate or quadruplicate, nearly 1 ml of serum is required to complete the test for a final confirmed result. The test is also relatively expensive, at least twice as expensive as the antibody tests. In addition, depending on the number of replicates needed and thetotal number of samples being tested, costs can become exorbitant. A protocol for an in-house p24 antigen assay designed for testing large numbers has been described and is more cost effective than commercially available assays.

To determine the levels of p24 antigen in blood, an HIV-1 antigen standard is diluted to prepare a series of six standards of varying concentrations. Concentrations vary between 0.0 and 125 pg/ml. A standard curve is generated from which optical density values of the unknown specimens are interpolated to determine their concentration. The standard curve is constructed using a linear graph and plotting the concentration of the HIV-p24 antigen standard (pg/ml) on the X-axis versus the mean optical densities for each standard on the Y-axis. Each standard is added in duplicate wells, and at least 5 controls must be included (3 negatives and 2 positives). If the value of the unknown sample is higher than the value of the highest standard, the sample must be diluted in normal human serum and the entire neutralization procedure is repeated.

More recently, a report has indicated that the p24 antigen assay can be modified to increase its sensitivity for detecting early HIV infection to a level approaching that of the PCR (viral load) test, and may be more effective in monitoring disease and predicting outcome. They describe a modification to the immune-complex dissociation p24 antigen assay procedure in which a signal-amplification step is used as a final step. This amplification involves the addition of a tyramide compound which generates an intermediate to produce more enzyme and substrate molecules; and hence, more signal. This allows smaller quantities of p24 antigen to be detected. Since the p24 antigen assay by itself has never been very sensitive (unless when used for testing culture supernatants), this modification could prove to be very useful. Its advantages over PCR include its simplicity, cost effectiveness, and high throughput capability. Further investigations will need to be performed to verify its performance characteristics and usefulness.

Upon initial testing by the p24 antigen test, the results are labeled as reactive or nonreactive based on the calculated cutoff value. If reactive, the test is repeated in duplicate using the same sample source. If the initial result is nonreactive, or if the initial result is reactive but both replicates on repeat testing are nonreactive, the sample is labeled as negative. If at least 2 results are reactive (repeatedly reactive), the sample is presumptive for containing p24 antigen, and must be confirmed using the neutralization assay.