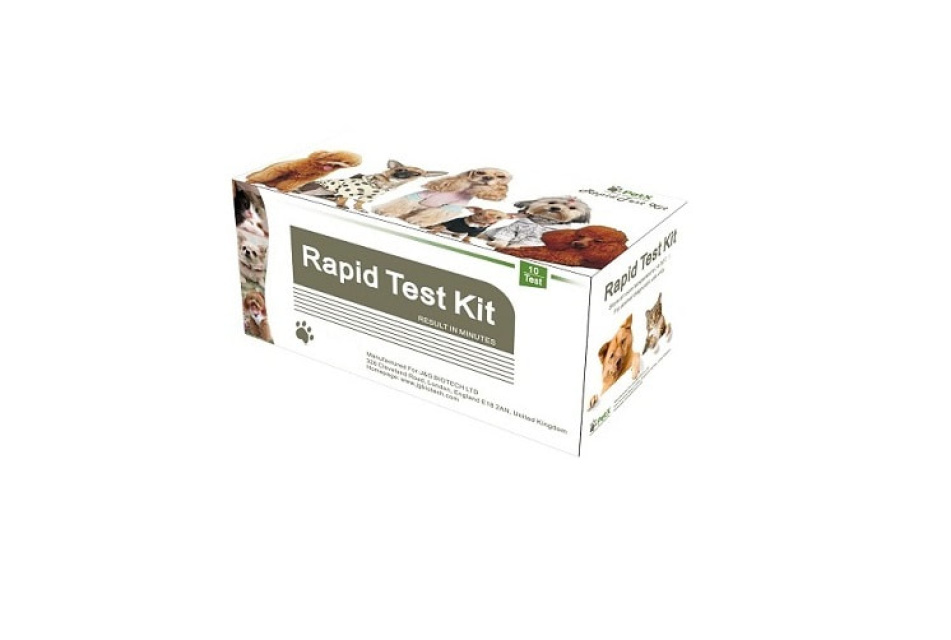 This 10 stripskit is designed to detect Brucella antibody in whole blood, serum or plasma.

Canine Brucellosis Test Kit is a Rapid slide agglutination test (RSAT) for the diagnosis of Brucella canis was described by George and Carmichael (Proc. Council Res. Workers in Animal Disease, November 1973). The basis of the test is direct agglutination of the killed stained antigen by Brucella canis antibodies.

Canine brucellosis is a chronic infection with Brucella canis that causes generalized lymphadenitis and mild to severe reproductive symptoms. Prostatitis, epididymitis, scrotal dermatitis, testicular atrophy and impotence can be present in the male; abortion typically in the final two weeks of gestation, resorption, infertility, and vaginal discharge can be present in the female. Brucella canis is infectious to humans. Caution should be exercised when handling serums to be tested. The test has been shown to presumptively diagnose infection with Brucella canis by detecting specific antibody that is formed 1 to 4 weeks after infection. The basis for serodiagnosis of canine brucellosis is the 2-Mercaptoethanol Tube Agglutionation Test (2ME-TAT) and the Rapid Slide Agglutination Test (RSAT). The 2ME-TAT and RSAT have demonstrated excellent correlation in experimentally infected dogs. In field situations, it has been recognized that an occasional healthy dog, culturally negative for Brucella canis will react positively in the RSAT, but not in the 2ME-TAT. The 2-Mercaptoethanol – Rapid Slide Agglutination Test (2ME-RSAT) has been developed in an attempt to eliminate discrepancies between the RSAT and the 2-ME-TAT. Certain non-specific agglutinins, reported to occur in the sera of normal dogs, are removed from canine sera when 2-mercaptoethanol is employed in the 2ME-TAT. Because of this occurrence, 2- mercaptoethanol is employed in the modified Rapid Slide Agglutination Test procedure.

Antigen and accompanying antiserum have been standardized and should be used together. Store components at 2-7C (35-45F). Do not allow reagents to stand at room temperature for excessive periods of time. Do not freeze.

Serum is required. Test can also be used with whole blood or plasma.